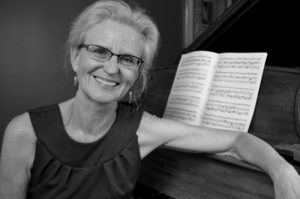 At our January meeting, the KCMF board voted unanimously to appoint Elizabeth (Beth) Etter our new Executive Director. In a field of highly qualified applicants from near and far, Beth stood out with her passion for chamber music, her decades of experience in performance and teaching, and a proven track record of administering successful music programs.

Recently Beth sat down with board member Gigi Edwards to answer questions about her life and work.

Tell me about the Allegheny College Community Music Institute that you founded and directed.

When I got my DMA [Doctor of Musical Arts] from Cleveland Institute, I was on fire with passion for what I had learned for so many years there. I wanted to create an opportunity for others to have the same experience I had. When I was an undergraduate student at Allegheny College, the chair of the music department had created a summer music festival. He brought in international superstars. I heard Kenneth Cooper perform a Mozart Piano Concerto at one of the festivals and I knew in that moment that somehow creating excellence in music would be my life. At Cleveland, I spent my days playing the piano in the studios of members of the Cleveland Orchestra. I learned as much from the strings and woodwinds as I did from my piano lessons—the essence of chamber music. After Cleveland, I set about creating a chamber music festival based at Allegheny, inviting the stars of my Cleveland experience to come and perform in this small town in northwest PA. For the time of the festival, the town and college glowed with excitement and young people had the opportunity to create a lifelong spark that led to many of them going on in music.

After spending so much of your life in Ohio and western Pennsylvania, how did you come to have a home base here in Rhode Island?

When my stepdaughter and her husband Seth Magaziner– who’s a native of Rhode Island and now a Congressman!– made clear they would reside here for the long haul, my husband and I started to poke around. We traveled the state, looked at more than 50 properties, and eventually bought a timber frame house in Wakefield constructed by a local builder whom we’ve come to know and befriend.

How did you learn about the Kingston Chamber Music Festival?

My step-son-in-law Seth knew I was seeking musical connection—my lifesource. When he met [then-KCMF Executive Director] Betsy Marcotte at a campaign event last summer, he mentioned me to her. Betsy gave me a pair of free tickets to an upcoming KCMF concert. I came to one concert, then bought tickets for the remaining one, and was completely blown away. Because of my past experience of founding and directing what became an international chamber festival, and because of my performance degrees from the Cleveland Institute of Music and lifelong experience performing chamber music, there was no doubt about what I heard. I knew I was in the presence of something truly phenomenal. I thought folks from NYC and Boston should be flocking to the area to hear these extraordinary concerts!

You weren’t originally thinking you would spend as much time in Rhode Island as you do now. How did this change come about?

I wrote to Betsy after the festival, thanking her and raving about what I heard. We had coffee a couple of times, and I then met Deborah, President of the KCMF Board. I knew instinctively that one way or the other I would become part of this extraordinary operation. I went through all the channels of joining the board, and then learned that Betsy was in the process of stepping down as Executive Director. So I decided to apply for the position.

Of all the kinds of music you’ve studied and performed, why do you find chamber music so particularly compelling?

I have always believed that the level of communication required in playing chamber music is perhaps the most sophisticated and civilized form of relating to one another that we have on the planet. Without a conductor, it’s all about mutual respect, patience, kindness, strength, integrity, individual excellence contributing to a masterful whole in which the sum of the parts is exponentially greater than the individuals. It is a tool for living a good life. I think people need this–yes–now more than ever. I have felt it is my life mission for a long, long time.

What are your favorite pieces of music to play and to hear?

My favorite piece to play is the Mendelssohn D minor piano trio. As for listening, there are too many for me to name a favorite: everything from Plainsong to Mozart to Schumann to Rachmaninoff to Holst… I am easily flooded with goosebumps, but it depends on the performance. Goosebumps are a mind, body and soul response. I got them at the KCMF concerts!

What do you love to do outside of musical pursuits?

Cooking! I’m always trying new things. What I love about subscribing to the NYTimes Cooking App is the diversity of cuisines that it presents. Trying new things and being open to diversity are what we need to do in music!!

We Were the Mulvaneys by Joyce Carol Oates. What I loved about that book is that the people in it changed. They changed because they communicated with one another. And that is what we do in chamber music!

Dr. Elizabeth (Beth) Etter founded the Summer Music Festival and Music Outreach Program at Allegheny College and served as Executive and Artistic Director of the celebrated international festival for young chamber musicians. The festival featured programs for high-school through adult chamber musicians who were coached by resident international artists.  A concert series featured performances by guest faculty and students during festival weeks.  Designed to promote and encourage lifelong interest in classical music for all ages, the festival also hosted a program for teachers earning graduate credit who attended the concerts and subsequently designed curricula using performance experience as the foundation for integration with core subject areas.  A Mini-Music camp encouraged elementary age students to listen and respond to the music with writing and drawing.

A celebrated pianist and harpsichordist, she has performed on many stages throughout the eastern United States including the Chautauqua Institution, Cleveland Museum of Art, and Carnegie Music Hall.  She has mentored and taught hundreds of young performers, and has served as a juror for national and international competitions, presented arts-in-education workshops for preschool through college audiences, and moderated as a panelist for national music conferences.  Her performances and interviews have been aired on WQED, WCLV, and WQLN. Specializing in chamber music and period instrument performance, her passion lies in the collaboration and communication involved in playing chamber music.  Her performances include the Erie Philharmonic, Chicago Chamber Orchestra, Chautauqua Chamber Orchestra, Pittsburgh Baroque Ensemble, Cleveland Camerata, Erie Chamber Orchestra, and the Holter Chamber Music Festival in Italy. She has served as piano faculty at Edinboro University and as staff pianist at Mercyhurst University.

She holds a Doctor of Musical Arts in Harpsichord performance and Master of Music degree in both Collaborative Piano and Harpsichord performance from the Cleveland Institute of Music where she studied with Anne Epperson and Doris Ornstein.  Other teachers include Angelin Chang, Alec Chien, and Sophia Rosoff.  She graduated from Allegheny College with a Bachelor of Arts in piano, where she subsequently served on the piano faculty while maintaining a thriving independent studio from which many students were launched with illustrious careers.