Memoir is an adaptation of my own mother’s memoir which gives the process and the product a heightened personal connection. The script is a series of short vignettes that trace Elaine Mackey’s life as a first-generation American, born in Steel Town USA, coming of age in the Great Depression, escaping an ill-fated Hollywood marriage to work for the Department of Defense in post-war Europe, and raising a family in Northern California in the volatile 1960’s.

Against the backdrop of the events of the 20th Century, à la Forest Gump, there is a touching candor and vulnerability to my Mom’s stories, revealing the tension between her shy nature and her longing for adventure; her “nice-girl” upbringing and her openness to experience. Familiar themes of love, loss, gender roles, and social mores are ensconced in her intense personal struggle with alcoholism and its stigma. 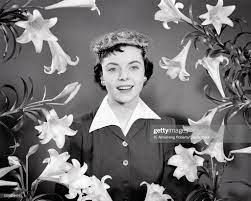 A vignette from her teens clearly embodies her essential struggle:

“I went to the swimming pool with my boyfriend Jim McHugh and a group of friends. Everyone except me, I guess, knew how to swim and headed for the deep end of the pool and jumped in. I was too embarrassed to admit that I couldn’t swim and I didn’t want to be a party pooper so I jumped in too.”

Composing Memoir was exhilarating! The stories are so musically suggestive that at times I felt like I couldn’t keep up with the task of writing down the music that sprang out of them. As Director Mark DeChiazza pointed out, singing and dancing were huge in my mother’s life (she appeared several times as a vocal soloist on a local TV station and was an excellent jitterbugger). Music is ubiquitous in her stories. My own compositional language is surely influenced by listening to her sing constantly around the house before my evolution through decades of my own experimentation. Also, Memoir more directly references “her” music including her signature song – “Night and Day” – and the lullaby medley she sang to me as a child. Overall, the musical language of Memoir is a bit simpler and more direct than I would use if I were writing a piece without connection to this text. Her voice, ringing through these stories, asked for something more innocent.

The combination of the Dover Quartet and arx duo (percussion) is ideally suited for Memoir. There are plenty of opportunities to employ the grave expressivity idiomatic to the string quartet as well as the playful spirit, wit and irony made possible by the surprising variety of sounds available to a percussion duo. Rich and complex experiences result from the multi-valent combinations of the two elements. Many of my mother’s stories ask me to combine two contrasting musical characters in order to spark a fresh, more particular musical alchemy. For example, the pickle she is in when she finds herself simultaneously engaged to Jim (her high school sweetheart) and Jerry (the tall, dark and handsome musician she met in Los Angeles while on a trip to visit relatives) inspires a counterpoint between the gentle warmth of Jim’s music and Jerry’s dark groove – a merge that I would not have thought of in the absence of her vignette.

The final vignette is not from my mother’s memoir but from my own. It is me telling the story of her passing. She told me and all those close to her that “today will be my last day.” In the end she overcame alcoholism and crippling shyness in order to be fully in charge of her own destiny.